The following programs were produced with WVIZ, public television. 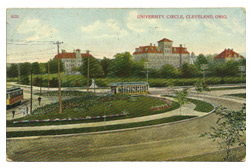 Shown on WVIZideastream eight times January and July 2014 and January 2015:

As fast as we move forward, we need to know where we are coming from.  Everyone should watch the film the way that suits them best.  Some restaurant leaders are planning to turn it on their TVs. In other words, spread the word!

YOU are in the film–anyone who is on a Board, works or visits an institution,  has stepped a foot in the Circle, been to a WOW Wednesday, been to a class, listened to music there, paraded the Circle there, been on the board of an institution–should be interested.

A quote from someone who saw it at the Baker Nord Center for the Humanities presentation in September 2013: “The best program in Cleveland was presented tonight… It was such a beautiful project on University Circle, I will want to see it again! Congratulations!”  Any individual,  family or institution with a TV set should make popcorn, gather friends and turn it on–bars, restaurants–etc. Or, enjoy it solo. Whatever your inclination, wherever you are, enjoy THAT program on WVIZ. (See WVIZ Program Guide pg 15-16.) You won’t be disappointed.  (See related website
www.universitycirclefilm.com.)   Flyer…

Museums and Schools (1989)
A video on the relationships that can be forged between schools and museums and the benefits of educational plans that integrate learning experiences in the classroom and the museum.

People Puzzle (1994)
The impact of prejudice on children. With psychologist, author Robert Coles and introduced by Barbara Jordan (former Representative from Texas) The result of this presentation was a discussion in the WVIZ studios, and discussions in 11 community sites on the subject of prejudice.

Children’s Museums: Bridges to the Future (1999)
A capsule of the story of children’s museums, their way of working and their impact on children and families.

Creative Essence 1900-2000 (2003-)
The summation of discussion in the community on issues in the visual arts at venues and over public radio. This was invited to be shown in the 2003 Cleveland International Film Festival.

The following program was produced with Storytellers Media, Inc.:

The History of Potter and Mellen (2005)
This program captures the history of Cleveland’s grand 100+ year-old store and of the legacy of stellar designing in jewelry and metalwork.

Produced with the assistance of the Distance Learning staff of the Cleveland Museum of Art and Emma Yanoshik-Wing and Suzan Jackson: